JANELLE RICHARDS, For OnlinePoker.com
Party Poker has been around for over 15 years and without a glitch they have continued to control the majority of online poker play. They consistently are ranked in the top 1% in all categories.

One of their strong points is that they really listen to players and approach online poker playing for players, designed by player.

There's no doubt PartyPoker has been through more changes than anyone in online poker over the last few years.

With a PartyPoker site revamp, buyouts, controversy over player segregation and a launch in the US, the firm has never been out of the limelight.

But changes aside, just how good are they under the hood? At OnlinePoker.com we take a closer look to see if PartyPoker is where your hard-earned poker dollar should be heading. 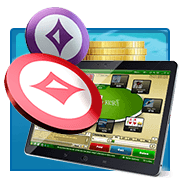 A schedule packed with chances to win WPT seats and a welcoming atmosphere for new players mean every kind of player will feel comfortable here.

What makes Party Poker worth your time 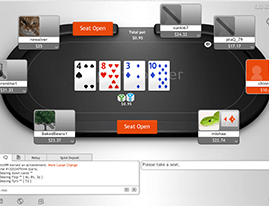 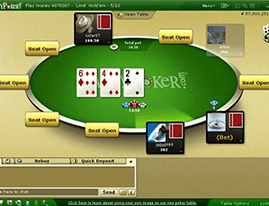 Does not accept US players, but Party Poker NJ does 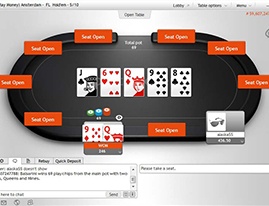 Claim now!
What you’ll love
What could be better

Originally one of, if not the, biggest poker sites in the world at one point, PartyPoker pulled out of the US market when UIGEA began to bite, and it agreed to pay a fine of several hundred thousand dollars to boot.

While it saw rivals overtake it, it was only when New Jersey legalized online poker that PartyPoker returned to the US market. In 2013, bwin.party launched nj.partypoker.com when it received one of the first new licenses for regulated Internet poker in the Garden State.

With a merger with a major betting site, bwin, a big revamp, and a potential takeover in the pipeline (as of October 2015, Playtech and Amaya were vying for control), things are on the up for the PartyPoker site.

REPUTATION RANK 4.8/5
THIS SITE HAS BEEN VERIFIED BY
VISIT SITE

Party Poker has very few blemishes even after being online for 15+ years. Since 2007 they have continued to amass a large percentage of the world’s online poker population. They are fully licensed through Gibraltar. It is good to know that in all the years in operation there have been no significant security violations. That is quite amazing considering the level of traffic. They regularly undergo independent auditing through iTechLabs. Additionally they are listed with the London Stock Exchange.

Many of the reasons that Party Poker is the master of their domain is due to the huge variety of cash games start at a penny and moving on up the line to encompass masterful high limits players. Not only are they an awesome source for cash games but, they are known for their Sit N’ Gos as well as tournaments that guarantee $15,000 a month. The reality is that you do not get to be crowned online poker royalty without firing solidly on all cylinders.

SOFTWARE RANK 4.5/5
SEE WHY Party Poker IS ONE OF THE MOST SECURE POKER SITES

Players have long complained about PartyPoker's out-of-date software and clumsy lobby. However, recently the site has had a re-haul.

Gone are the ugly tournament lists; in has come a sleek re-design with a better colour scheme and added features like Achievements, where players are awarded special 'shields'.

“Party Poker’s old, frustrating software has been replaced by a super-sleek interface and an easy to read tournament schedule.

Your current "Mission" status is clearly displayed on the lobby, as well as any bonus you have running and your Loyalty points. Missions give you the challenge of completing certain tasks (win 5 hands, win with aces, eliminate 5 players in a row, etc) with a reward at the end of it, like a free tournament token. It's a nice innovation in this world of social gaming when achievements and bragging rights posted on a social network page are key.

Meanwhile, under the new 'Overview' tab you can clearly see which tournaments you're registered for, your statistics such as number of cash game hands played recently, and an easy-access Hand History on all games.

As for the tables themselves, the tournaments and cash games move a little more smoothly than before, and the mobile client (available for iOS and Android) is a success, though, and easily beats other major rivals in terms of its usability. 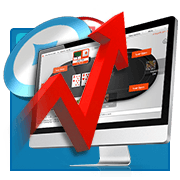 While a $20 NLHE Sit 'n Go didn't take long to fill on a busy evening, cash game traffic was pretty low. PokerScout records around a 24-hour peak of 2,600 players, which puts the site below Full Tilt, Bodog, and 888poker in terms of traffic.

Big guaranteed tournaments, however, are usually met, with a lot of players turning out for the $200,000 Sunday Major.

PartyPoker offers the full range of Hold'em tournaments and cash games, with Fixed Limit, Pot Limit and No Limit Hold'em on offer, as well as Omaha Hi and Hi-Lo, and 7-card Stud. The games are pretty weighted towards Hold'em, however, so the Badugi players among you may want to hunt elsewhere.

Cash games and tournaments are generally geared towards casual players. Some have a smiley face next to them in the lobby. This indicates a table where you can only play one table at a time. These are perfect for 'friendly' games where you're not up against multi-tablers.

PartyPoker also offers its version of 'fast-fold' poker called fastforward, which moves you to a new table as soon as you've finished a hand.

Sit n' Go players are well-served at the lower stakes at the PartyPoker site. However, the biggest you'll find are 18 and 36-player Sit 'n' Gos running 24/7.

The big highlight of PartyPoker, however, are the WPT qualifiers running on the site. After the bwin.party takeover a few years ago, players can win themselves packages on the World Poker Tour via online qualifiers. The PartyPoker site still has an issue with offering more than one paltry guaranteed package per final, though.

For NJ.party players, the highlight is a big-money $100,000 Sunday major guarantees a six-figure prizepool, with a cool $20k for the winner.

The PartyPoker site is obviously keen to big up its casual games. You may be able to get a no-deposit bonus to try out their casual cash games and they run a welcome bonus which offers new real money PartyPoker players a bonus of 100% when they make their first deposit. This bonus is being paid in instalments.

Continuing the 'Achievements' theme, there are also various cash game and Sit 'n; Go missions which are monthly promotions that reward money for hitting certain objectives (winning a hand with every pocket pair, hitting a straight flush, etc).

Meanwhile, a revamped loyalty program at PartyPoker makes it easier for players to hit the Silver, Gold or Platinum member levels. Essentially, the upgraded program has increased the rate with which you can exchange points for cash (22.2 percent). The higher you get, the better your exchange rate.

Loyal PartyPoker players can earn entries into exclusive freerolls, win tickets into the $500,000 guaranteed event happening on the site, and win tickets to live events.

The new loyalty program kicked off in March 2015.

“Party Poker is doing a great job of maintaining a world-class poker room. From ongoing bonuses and promotions to 24/7 tournament action, they are serious about promoting poker as both a pastime as well as a viable game of skill.”

This page didn’t even begin to talk about how amazing their customer service is or the many different options beyond the poker room. Party Poker offers up an online casino as well as video poker, roulette, blackjack and more of the many favorite games of chance that keep gamblers engaged and winning real money.

Party Poker remains a very viable online poker site because it provides a great place for newcomers to learn the game with poker school as well as recreational players to enjoy soft games without fear of aggressive sharks around every corner.

PartyPoker scores in the top 1% on all areas from software, security to rapid payouts and easy methods of deposits.